I had missed the set up for the trial as I was overseas, so the organization was left in the capable hands of Zander. It was really great to once again arrive at a trial having had nothing to do with it.

Wellington is a very good trials venue but one we don’t use that often, probably as it is the furthest out of town of all our venues. The sections were mostly variations of old ones. The first one however was new over some rocks, then through the rubble of a demolished building. Nothing difficult about it giving an easy start to the trial. The next section was pretty much an old one but in reverse. Part of the section was through the fork of a tree which wasn’t too much of a problem in the past as the direction was upwards. This time, approaching it on a downward slope, changed it completely. Getting through it un-penalized was very rewarding. The section ended with an off camber turn under a very low branch. All in all a very technical and well laid out section. Three and four were both in amongst rocks and not too difficult but still taking the odd mark here and there.
A short ride took us to the next group of four sections. The first one under trees which began with a ride down a stone drainage channel and then up and down soft banks before exiting up a path and back into the sunlight.
The next one, section six was the only one I couldn’t clean. The problem was a very tight line up around a tree in very soft sand. Further into the section a step down into a stream was causing some riders a bit of trouble, but ramping over it was all it needed.
Section seven started over some concrete pipes with the master’s line then going over an enormous log with the other classes going round it. Soft sand in this section again took some marks off riders but generally everyone got through.
The last section probably had the most and the loosest sand of them all, together with a tight drop in and turn, it was a challenging section that seemed easy when you cleaned it but it required being fully in control and on the right time to do so.
New rider Charl and Murray rode their own choice of lines so they have been scored separately from the rest.
Charles was a spectator/photographer for the day as he is recovering from his broken shoulder at the last trial. He seems to be making a good recovery and is now allowed to drive. He has sold his bike and now on the lookout for a new one.

Thanks to Zander for organizing the event.

The next trial is planned for 22nd May at Durbanville, subject to confirmation.

Once again, this event took place at Constantia, where it has been since its inception twenty one years ago.

The intention had been to set the sections quietly during the week without any bikes and as little disturbance as possible. However the local baboon troop had other ideas, and even up to the morning of the trial, their presence delayed the final placement of the scoresheets and begins and ends markers. They eventually moved off as more riders arrived and everything then went off well.

It was a really beautiful day and the trial started off on time with the riders briefing and traditional moments silence.

The sections were in the same areas as in previous years, and run in two classes, experts and clubmen, split further into classic and modern, and a junior class.  There was a very good turnout of fifteen riders.  The clubman classic class turned out to have the best entry with six riders, which is very encouraging as the interest in classic bikes continues to grow. The next best were the modern clubmen with four riders. This group was made up of three first time riders plus Earl Krause. Earl retired with a mechanical problem and the all others for their own reasons.

For me, it was a bit lonely being the only classic rider in the expert class, but I thoroughly enjoyed the event with the Suzuki running very well.

The event closed with the awarding of the trophies and braai.

Thanks to everyone who helped, especially Trevor , Carina and Brodie for picking up most of the markers, Lee and Mary for the results, Hans for the attending to the fires, Ludi and Kevin for a quick visit,  and the Ramsden family for the use of the venue. 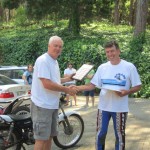 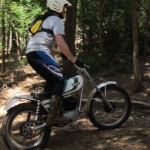 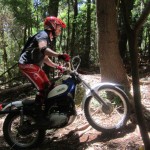 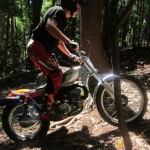 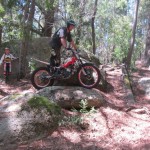 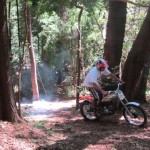 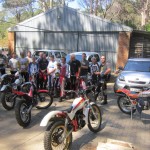 A trial at Bonthuys Farm in Kuilsriver in September could be anything from hot with spring flowers to cold and wet, the latter being what we got.

Mark Shearer was a non-starter due to the ‘flu, while others decided to give it a try despite still recovering from injuries.

Section one was an old “favourite”, over the tar poles. It’s only a favourite if you like it, which I don’t particularly, but despite a turn that got quite muddy, it wasn’t too much trouble.

Section two was another in the same vein, using the skips and road material heap. This time Michael brought his homemade ramp which he put into the expert line which made one of the waste skips very easy.

Section three was the first real section as it had no artificial hazards, but had to be eased from its original course which would have been too dangerous in the wet conditions. In its revised form I think it was ideal for the day.

The next one went up a stoney path, ridden many times by all classes in the past, but the presence of a few markers seemed to have turned it into something quite tricky. Maybe it was a bit long, but it certainly took its toll.

Section five, was another revised section which got progressively more muddy and slippery until the masters line was unrideable and the expert line so slippery just getting past the last yellow flag was a mission.

Section six was a relief as it was quite rideable for all classes, while section seven had to be completely changed and then became a bit too easy, for experts anyway.

The last section was completely new. The start was along a short muddy path through a bush and then onto or over several old farm implements and trailers. The one trailer which looked quite innocuous, had a wooden deck that was so slippery, Michael could not get any traction on it at all, so we had to leave it out.

It rained for most of the trial but started clearing up by the end. Unfortunately Charles and Pete had to retire due to bike problems and pain, and Murray had to leave early, but those that finished agreed it had been fun.

Thanks to everyone for helping at this event. This trial brings the club championship to an end, though there is still one event, the John Fulcher Trial to come next month. The championship results will be published later.

It’s been a while since we had a classic trial or twin shock trial, and with the John Fulcher trial not too far away, it was felt that one now would be a good idea. The initial response indicated there would be a reasonable entry, but unfortunately illness and mechanical problems took Mark Shearer and Trevor Kinnear out before the trial started.

Bitterly cold and wet weather had preceded the trial, but apart from  a slight drizzle, the weather was good and just got better as the day went along. The venue was at Vista School in the Bo-Kaap  and the sections were very similar to the previous club trial, with the first one under the school building.  It was a fairly easy section, but caught Michael on a Honda TLR 200 and me on my Suzuki RL 250 for one each on the first lap. Section two was a slalom course between trees, taking very few marks. Section three was probably the most tricky with one particular log giving most of the trouble. I got stuck on in on the first lap and had to take a five as I couldn’t get away, but Michael managed a clean. Section four was an easy climb between trees and over small logs, but section five was probably the most technical. It was a very steep descent on a wet grass bank with a turn at the bottom and over a large log which was the problem. This part of the section was the same as it was in the previous trial for modern bikes. Michael and I were both worried that the drum brakes on our classic bikes wouldn’t manage the gradient, but in fact they did. The problem was counteracting the inevitable slide when trying to make the turn. I think everyone dabbed on the first lap but as the section dried out, there were a number of cleans.

Section five started over a pile of rocks then wound its way over logs up to the top of an embankment without too much trouble. Section seven had tighter turns and a stoney path while section eight finished off the lap with a series of ups and downs on a low bank.

There were only two lines on the sections, one for experts and one for clubman. Modern bikes were allowed to enter and some of the clubman riders took the opportunity to ride the expert line as they knew it would not have any major obstacles.

The only other twin shock bike was a Yamaha TY 250 ridden by new comer Martin for the first time.  The bike conked out in one of the sections but a new plug quickly fixed that.

Thanks to everyone for collecting the markers and Michael for helping set the sections the week before.

The next trial will be at Kuilsriver on 15th September. 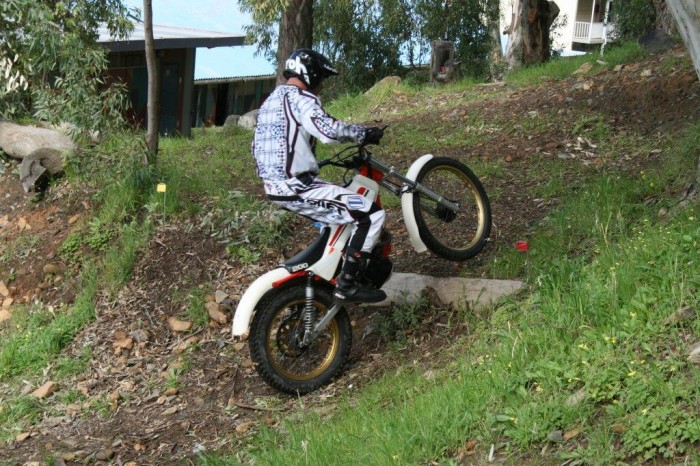 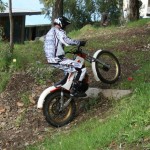 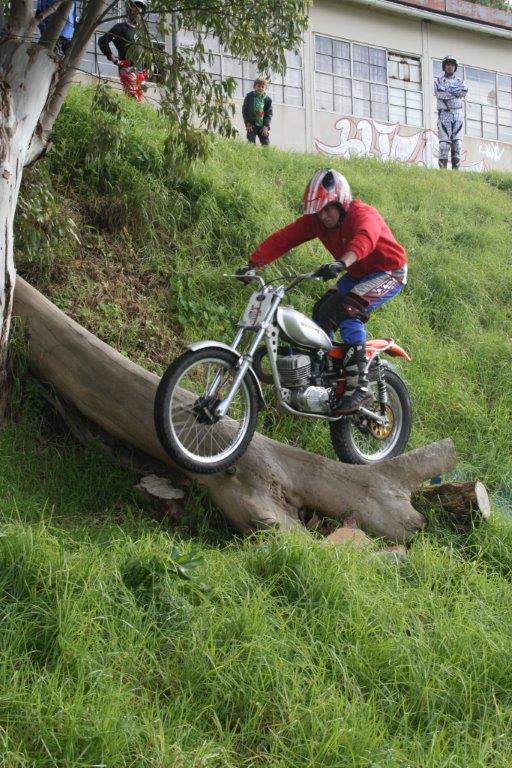 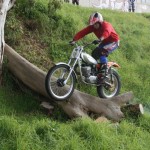